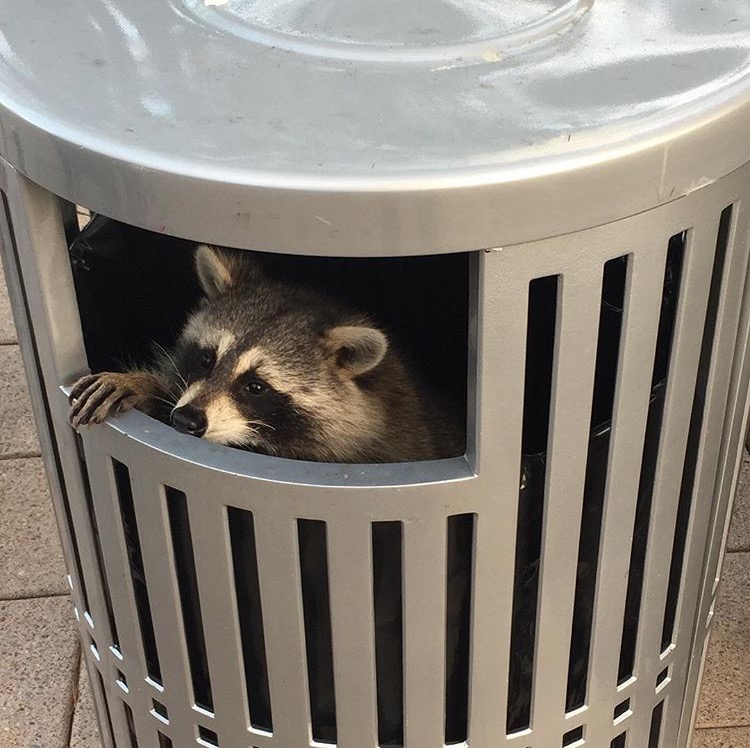 The name’s Lotor, but when I was born, my mutha named me Reggie. She is a Brooklyn raccoon and mostly ate garbage while pregnant with my sisters and me. That’s why I have such distaste for the stuff—garbage that is. You see, I’m just y’ average campus raccoon who’s got no tolerance for trash and some might say that doesn’t make me average at all. You see, most raccoons go Yonkers for trash, but it just leaves a bad taste in my mouth.

I just couldn’t bear the thought of putting something so rancid in my mouth. Wasn’t long before I resorted to sneaking onto food trucks. Anyhow, one hot day I hopped onto some truck with an orange square and blue circle on the side, and a big ol’ bag a day old rolls was waiting for me inside. I must’ve knocked out on the fifth one cause the next thing I knew, I woke up to the shrieks of a tall muscular man; I was outta that truck faster than a squirrel up a tree.

But I didn’t get too far. I ran right into a crackling blue bag filled with empty bottles behind this oddly shaped building, it had a huge window through which you could see chairs and tables and colorful squares lining the walls. Only when I scampered outta there did it hit me like damn, that big heap didn’t smell rancid, and it didn’t even look that gross! I spent the rest of that day exploring the wooded area that surrounds the apartment buildings close to where the truck had parked. I met some interesting creatures that first day, one of which had a great deal to teach me about your campus, Dakota the skunk. But lucky for me, I showed up before the SUNY winds brought with them the promised pack of garbage kids that all of you make up.

One morning we were walking through the wooded area by the courts with short and long nets and I was made aware of what serious repercussions your reckless abandonment of waste can cause. There were mounds of soggy litter trapped within piles of naturally fallen debris that made a sad attempt at discomposure over the summer months. Dakota took a long drag of a cigarette butt she had been searching for all morning, eyeing the mound that had me entranced, and said something about me waiting just to see how bad it would get. And it did.

All at once there were trash people everywhere! There were suddenly dozens of Pepsi cups of all sizes, plastic bottle caps embedded in the dirt, torn and withered white containers with varying smells and remains that spilled into the surrounding area of the item thrown askew. It was a lot to take in.. I started taking part in Dakota’s cigarette butt scavenging. Smokin’ em by the handfuls, as there were constant redistributions of the murderous remains of mostly inhaled chemicals. There are even some tall green posts that dump a bunch with a simple knocking over. Dakota said there used to be a bunch more just like them, but apparently the school’s trying to enforce a tobacco free campus. I couldn’t tell. Not with the way you students blow through smoke.

There was one morning I remember with great vividness where Dakota and I were smoking under the shrubbery outside the end of the long resident house. We were chatting about the new additions of wreckage among our bushes as a swift breeze shook the wet leaves of a night-long rain, which in turn knocked over the largest Pepsi cup I had eva seen. Or felt for that matter. I only heard it tip and break free from the branches supporting it above me. Next thing I knew I was covered with dirty, watered down sticky syrup and matted with gooey leaves and twigs.

Moving past this absolute trauma imposed on myself by the actions of neglectful and unconcerned students, I’ve taken up residence in a much safer and desolate location. I have moved myself into one of the many barely or unused waste bins about the campus. Matter of fact, I haven’t seen a slimy stash of trash in days! Until you kids start actin’ right, you can find me here.